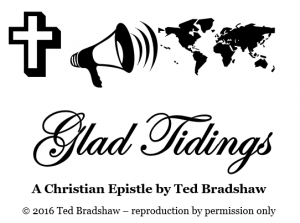 Fatherhood God’s Way George Bradshaw married Jane Swift in 1930. Both sets of their parents approved of the match. Unhappily, the plans for a society wedding became overwhelming. To “simplify” matters George and Jane, much to the distress of her mother, Nanny, eloped! George and Jane quit school, got a small apartment and George began […]

Will You Or Won’t You? My brother was in 1st grade when I was in 8th grade. It was the only year we were in school together. One lunch recess, I had checked out a basketball and was shooting baskets alone. My first grade brother and a friend asked if they could shoot with me. […]