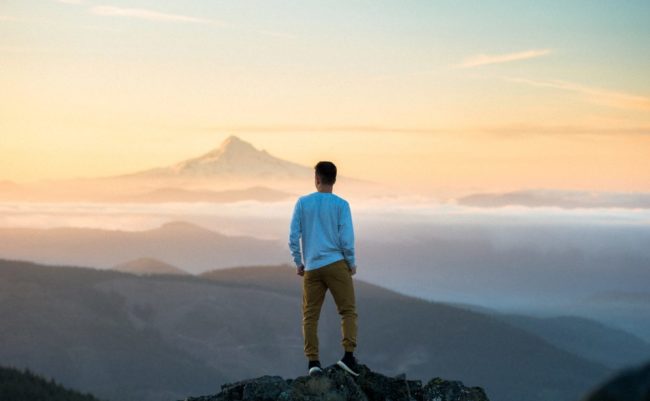 And do not lead us into temptation,

But deliver us from the evil one.

For Yours is the kingdom and the power and the glory forever. Amen.

Moreover, when you fast, do not be like the hypocrites, with a sad countenance. For they disfigure their faces that they may appear to men to be fasting. Assuredly, I say to you, they have their reward. But you, when you fast, anoint your head and wash your face   (Matthew 6:13-17)

Jesus asked his disciples “Who am I?” They answered various things, until Peter nailed it, “You are the Messiah, the Son of the living God!”

Men and women live their lives with the same question, “Who am I?”

While usually phrased in terms of what we do, these questions usually mean, “Who am I?”

The Seattle Phone Book lists about 300 Psychiatrists and about 350 Psychologists. These practitioners have perhaps 25 clients a week—over 16,000 people who are basically asking, “Who am I?”

While this is a basic question, I submit it is not foundational. Actually, who we are is based upon WHOSE we are. 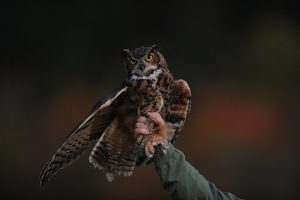 When I was ordained, one of the ministers in a neighboring church gave me an owl. He said that I was to always listen to the question the owl was asking me, “Whose, whose, whose?” In response I should always question whose I was, whose voice I was listening to and whose demands I followed.

Peter was impetuous. He embraced Jesus as his teacher and became one of the Disciples. His wholehearted commitment placed him at the center of Jesus’ ministry. He tried to argue with Jesus about Jesus death, and was chastised for it. Peter stoutly affirmed his loyalty, but he was the one who publicly denied his Lord. Peter and John raced to the tomb. John beat Peter there, yet it was Peter who had the temerity to be the first one inside. It was Peter whom when he saw his resurrected Messiah on the shore, jumped naked into the water and swam to him.

So when Jesus asked, “Who am I?” Peter blurted out not only the right answer, but the whole answer. He not only stated who Jesus was, “Thou art the Christ…”, but also stated WHOSE Jesus was, “…the Son of the living God.”.

The “Who am I?” question is really self-centered. It focuses us in on ourselves, out talents, our feelings, our needs, our goals. The problem with that is that we live in a world of others. Those around us have feelings, needs and goals too. We live in a spiritual world as well—whether we recognize it or not.

The better question, “Whose am I?”, focuses us on the people around us and on God. It allows us to see ourselves in community. We can work out how we fit in. When we include God in this question, we tap into His inexhaustible resources for discovering who we are in this world and in His.

So let’s get beyond the question of who, and investigate WHOSE. To whom do we belong.

I suppose belonging to self is most appealing to people generally. I also claim that it is ultimately self-destructive. While belonging to other people is in some sense better, it is still very limiting. It is temporal and temporary. We have a sense of wholeness only so long as others live or so long as they are satisfied with us.

We Can Belong to God

Belonging spiritually means we have two choices. Because of the world into which we all have been born, we belong to Satan by default. It is only through God’s action and our choice that we can belong to God.

Jesus’ death on the cross had several purposes. He paid the penalty for our sin. He showed us the way to the Father. And He purchased or redeemed us from Satan. Thus, once we surrender to God and ask Jesus to become our Lord and Saviour, we are cleansed from our sin, justified in God’s eyes, purchased as bond slaves from Satan, adopted into God’s family, and given eternal life.

Because we are children of God, we belong to Him. We are joint heirs with Christ. We share his inheritance. We can do all that He could do—that is, if we believe Jesus.

He that believes on me the works I do he will also do; and greater works than these will he do. Whatever you ask in my name, I will do for you, so that I will glorify the Father.”   (John 14:12, 13)

We also share His priesthood. Peter in his first Epistle tells us in 2:9, “you are a chosen generation, a royal priesthood, a holy nation.” So we are kings and queens and priests of Almighty God. We hold exalted places in this world and the next.

But you are a chosen generation, a royal priesthood, a holy nation, His own special people, that you may proclaim the praises of Him who called you out of darkness into His marvelous light;    (I Peter 2:9)

I Belong to God

So the best possible answer to the foundational question, “Whose are you?”, is, “I belong to God and he has made me His child. As a result I am a prince or princess of Almighty God.” Because we belong to God we have all the rights and privileges thereto appertaining.

In addition we have duties and responsibilities as children of God.

For this very reason, make every effort to add to your faith goodness; and to goodness, knowledge; and to knowledge, self-control; and to self-control, perseverance; and to perseverance, godliness; and to godliness, mutual affection; and to mutual affection, love. For if you possess these qualities in increasing measure, they will keep you from being ineffective and unproductive in your knowledge of our Lord Jesus Christ.   (2 Peter 1:5-8)

Live diligently—really working at it, instead of drifting with the tide.

Be diligent in faith—seeking actively to increase your faith; to believe God is greater than you think He is. Expect more of God. Understand you are His child and a joint heir with Jesus. Trust He will do more with you and through you.

Be diligent in virtue—stay honest before God asking Him to guide you into living righteously. Ask Him to cleanse your life of anything that displeases Him.

Be diligent in knowledge—learn more about God. Study the Bible daily. Test the things you read by trying to live them.

Be diligent in temperance—learn where you tend to stray from God’s way. Control you temper, your diet, your tongue,

Be diligent in patience—become aware that, since you belong to God, He is in charge of your time. You don’t have to fret.

They that wait upon the Lord will renew their strength.  (Isaiah 40:31)

Be diligent in godliness—learn to emulate God in kindness and undeserved love and loving generosity.

Be diligent in brotherly kindness—look for opportunities to do good deeds for one another, grant unmerited gifts.

Be diligent in love—love is not a “special way of feeling. Love is a choice. Love is the most difficult of God’s virtues, because there may be no reward. The majority of the world does not love Him and does not respond. Yet loving the unworthy is the way of victory and the way to God’s own heart. We can begin to understand why love is at the end of this chain of growth.

For God so loved the world that He gave His one and only Son, that everyone who believes in Him shall not perish but have eternal life.   (John 3:16)

As the Letter to the Hebrews tells us in Chapter 6 there are foundational principles of the doctrine of Christ.

Therefore let us move beyond the elementary teachings about Christ and be taken forward to maturity, not laying again the foundation of repentance from acts that lead to death, and of faith in God, instruction about cleansing rites, the laying on of hands, the resurrection of the dead, and eternal judgment. And God permitting,we will do so.

It is impossible for those who have once been enlightened, who have tasted the heavenly gift, who have shared in the Holy Spirit, who have tasted the goodness of the word of God and the powers of the coming age and who have fallen away, to be brought back to repentance. To their loss they are crucifying the Son of God all over again and subjecting him to public disgrace. Land that drinks in the rain often falling on it and that produces a crop useful to those for whom it is farmed receives the blessing of God. But land that produces thorns and thistles is worthless and is in danger of being cursed. In the end it will be burned.

Even though we speak like this, dear friends, we are convinced of better things in your case—the things that have to do with salvation. God is not unjust; he will not forget your work and the love you have shown him as you have helped his people and continue to help them. We want each of you to show this same diligence to the very end, so that what you hope for may be fully realized.  We do not want you to become lazy, but to imitate those who through faith and patience inherit what has been promised.   (Hebrews 6:1-12)

The Certainty of God’s Promise

When God made his promise to Abraham, since there was no one greater for him to swear by, he swore by himself, saying, “I will surely bless you and give you many descendants.” And so after waiting patiently, Abraham received what was promised.

People swear by someone greater than themselves, and the oath confirms what is said and puts an end to all argument. Because God wanted to make the unchanging nature of his purpose very clear to the heirs of what was promised, he confirmed it with an oath. God did this so that, by two unchangeable things in which it is impossible for God to lie, we who have fled to take hold of the hope set before us may be greatly encouraged. We have this hope as an anchor for the soul, firm and secure. It enters the inner sanctuary behind the curtain, where our forerunner, Jesus, has entered on our behalf. He has become a high priest forever, in the order of Melchizedek.   (Hebrews 6:13-20)

Understanding these, incorporating them into our lives and growing beyond them toward perfection is the mark of belonging to God.

These foundational principles are:

As children of God we are called to grow in Christ.  Never be satisfied with milk and pabulum, but earnestly seek to understand meaty issues of Christian doctrine and Christian life.

We demonstrate to the world WHOSE we are by our lives. Living in a way that blends into society communicates that we belong to society. Living in a way that satisfies our own needs and desires communicates that we belong to ourselves. However, living godly lives in opposition to society and in opposition to ourselves communicators that we are not only bond slaves to Christ, but also children of God and heirs to Christ’s Kingdom. It is likely we won’t fit in. It is likely the world will hate us. But this is a small price to pay for an eternity of blessedness.

When you look into the mirror at the end of the day, look into your own eyes and ask, “Whose were you today?”

Holy Spirit, guide us into the way of righteousness. Make our lives reflect Jesus so much that people will come to us and say, “Please show me the way to Jesus.”

Now the God of Grace, who has called us to His eternal glory by Christ Jesus, after you have suffered awhile, make you perfect, establish, strengthen and settle you. To Him be glory and dominion for ever and ever.